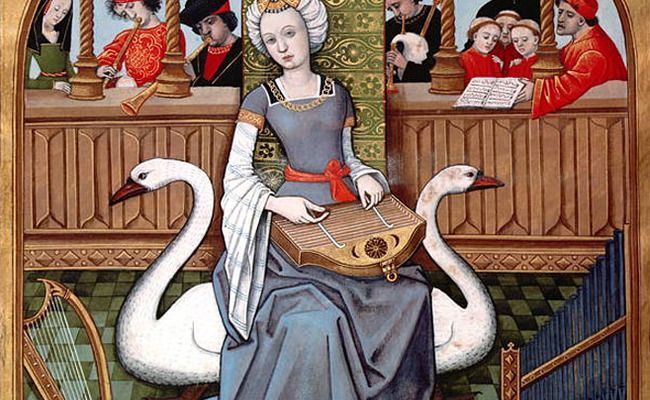 The 14th century was an unstable age. The humanism was strengthening and Church 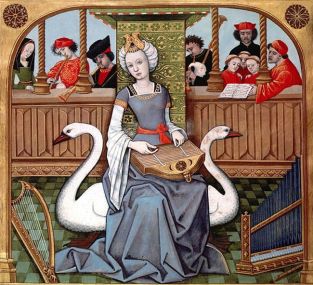 authority was being undermined by the move of the papacy to Avignon (1309–1378) and a schism between rival popes (1378–1417). Church control reduced and human reason became an authority on its own. The independence from the church led the human concerns to be more important in literature, education and art. Originally, humanism was not an academic movement but somewhat a program defined and promoted by statesmen. Correspondingly, the appearance of great literary works in vernacular (ordinary) languages by writers such as Dante, Boccaccio, and Chaucer are great examples of the change in that field at the time. In music, the new musical style known as Ars Nova (new art) began in France after the treatise written under the same title (Ars nova) by composer Philippe de Vitry (1291–1361). This treatise demonstrated the new innovations in rhythmic notation characteristic of the new music. Outstandingly, polyphonic art song was the most important new genre.

A narrative manuscript known as Roman de Fauvel (c. 1315)contains some of the earliest examples of works in the new style. It includes thirty five motets and numerous monophonic songs, many of them have texts that refer to the contemporary events. Furthermore, some of Philippe de Vitry’s motets that contain examples of isorhythm (equal rhythm) with the tenor featuring a repeating pattern are available in Roman de Fauvel. This recurring rhythmic pattern of the motets in tenor was called taleo, and the recurring melodic pattern called color. Furthermore, the taleo’s and color’s length could differ and not have a matched ending. Sometimes, isorhythm could be used for the upper voices to emphasize the repeating rhythmic pattern of the tenor. Singers’ task was much easier to memorize the isorhythmic parts. Notably, exchanges of melodic phrases between two or more parts in turn led to canon, a form in which all voice parts are derived from one tune, either by strict imitation of the basic melody or by manipulations stipulated in often quite sophisticated verbal instructions.

Guillaume de Machaut (ca. 1300 – 1377) was the leading poet and composer of the French Ars Nova. He was very well admired by contemporaries as a master of French versification and a prominent composer. He was the first composer to make special effort to organize his works for future generations, and the last poet in France to think of the lyric and its musical setting as a single entity. He has spent most of his career working for royalty. Compare to Vitry, Machaut’s isorhythmic motets are longer and more complex, and the upper parts are only partly isorhythmic. He frequently used hocket device (a popular device in 13th and 14th century polyphonic music that alternating between parts, single notes or group of notes) in his compositions. Remarkably, Machaut’s Messe de Nostre Dame (Mass of Our Lady) is considered the first polyphonic setting of the Mass Ordinary to be written by a single composer and conceived as a unit. The Ordinary of the Mass usually employs texts that remain the same for every Mass. Machaut’s Mass divides into sections as follows. The Gloria and Credo that are in the style of discant (mostly syllabic, with the four voices declaiming the long text together), and the Kyrie, Sanctus, Agnus Dei, and Ite, Missa est are Isorhythmic.

In this era, composers were freer to write the rhythms that could not be notated in 13th century. Breve and semibreve note values, could each be divided into either two or three of the next smaller note values. The division of the breve was called time, and semibreve’s division was called prolation. A new note value which was smaller than semibreve called minim was introduced. Also, there were the triple divisions and duple divisions which were called perfect (major) and imperfect (minor). The four possible combinations of time and prolation produced four different meters, they were each indicated by different mensuration sign. Therefore, composers could notate anything that singers could sing.

In 14th century standard refrain forms, all chansons have distinct patterns of repeated music or/and text. Virelai usually has thee stanzas (bba), that each proceeded by the refrain (A). Then, a final refrain concluded the song. In general, ballad consists of three or four stanzas that each sung to the same music (in aab form) and ending with a refrain (C). In a rondeau, a refrain (AB) frames a stanza (aab) and the first half of the refrain (A) sounds midway through the stanza.

Moreover, Rose, liz, printemps, verdure which is a rondeau by Machaut, presents the typical of his lyric style, with its long melismas, rhythmic sophistication, and treble-dominated texture. The most challenging form was the ballad, since it had the least repetition. Also, Ballades were the most serious of the fixed forms (forms fixes) and had philosophical or historical themes.

The 14th century in Italy is entitled trecento. Unfortunately, most music during this time was not written down. Certain northern cities (especially Florence), were where the secular polyphonic songs cultivated. A manuscript richly decorated called Squarcialupi codex contains 354 pieces for two or three voices from the 14th to early 15th centuries and was probably copied around 1410 – 1415.
Another significant form of the 14th century is madrigal. It’s based on relatively constant poetic form of two or three stanzas of three lines each, with 7 or 11 syllabus per line. Madrigals were most often set polyphonically (in two parts) and usually written for two relatively equal voices that irregularly echo each other and sing long melismas on the last accent syllable of each line of poetry. The form of a typical two-stanza madrigal is AAB. The B section could be a one or two line coda, or a concluding phrase that its text sums up the poem. Correspondingly, the new style of lyric poetry of Florence had a great influence on the madrigalists, Francesco Landini, Giovanni da Cascia, Jacopo da Bologna, etc. are among the most famous madrigalists of the 14th century. Some of their madrigals are available in Squarcialupi codex. Particularly, Italian Francesco Landini was the most impressive composer of the era. He was fame during his lifetime for his musical memory, skill in improvisation and his virtuosity on the organetto as well as for his compositions. He learned his art after being blinded by disease at a young age. He worked at a monastery and then a church, yet no sacred music by him is survived.

Additionally, caccia (hunt or chase) and ballata were among the important forms of 14th century. The caccia is a strict canon that could also consist of a non-canonic third part, followed by a ritornello. Caccia texts were typically about realistic animated scenes e.g. hunt, marketplace, etc. And ballata is a polyphonic lyrical piece that developed in the late 14th century. Its AbbaA form resembles a stanza of the French Virelai. Many cadences under-third cadence (Landini cadence), in which 6th degree is inserted between leading note and the octave.

On the other hand, the distinctive sound of English music and its qualities had a great influence on Continental developments of the 15th century.

In the later 14th century at courts in southern France and northern Italy, composers developed the Ars Nova style to a height of complexity and refinement. Later on, it was called Ars Subtilior by music historians. Composers such as Philippus de Caserta verified the limits of Ars subtilior by syncopations, different meters in different voices and rhythmic disjunction. Red notes were one of the techniques used in Ars subtilior. The red notes were indicating an alteration of the note value by one third.

In 14th and 15th centuries, a small group of voices or instruments or a combination of the two could perform polyphonic music. There was no uniform way of performing any particular piece though. The only classification for the instruments was as loud (high) or soft (low). Loud instruments (e.g. shawms, trumpet, trombone, etc.) were often used outdoors, and soft instruments (e.g. woodwinds, strings, portative organs, etc.) were used indoors. Sometimes, performers had to alter notes chromatically (known as musica ficta) to avoid tritons and to create smoother lines. The original sense of musica ficta is not common these days. The term changed to pitch alterations, which was necessary but not notated.

The Story of Music (Part 2)

The Story of Music (Part 1)

Videos from my YT